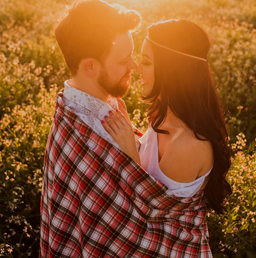 Be inspired by the success stories of couples who found love through international dating.

It wasn’t that long ago when online dating was associated with such an ugly stigma. But fast forward to 2019, the narrative couldn’t be any more different. Thanks to the advent of modern technology and the pervasiveness of the internet, today’s dating scene have dramatically changed. The accessibility and convenience that the internet provides has also given way for international dating to be more prevalent these days.

But just as the common adage goes: you can never please everyone. There are still people who remain skeptical about this method of dating. If you are one of those people who aren’t yet sold to the idea of finding love online, this blog is for you. We aim to change your mind about online dating through these inspiring and moving success stories of couples who found love online:

1. Julie and her French amour

Julie Herniak's love story has once again proven that love transcends distance, language, and race. Julie, a Polish Canadian from Spain, met her French lover through an online dating site. Right off the bat, the language barrier was their first and greatest challenge. The man knew very little English, and all she knew in French was "Bonjour" and "Je suis Julia."

Although communicating was a struggle due to the different languages they speak, it never stopped them from consistently keeping in touch. Julie tried her best to communicate in French. She would write her thoughts down in French before skyping each other. And although she would struggle to pronounce and enunciate the words correctly, all that mattered to them was to get their messages across.

Julie’s French boyfriend eventually came to Spain to live with her. Despite all the obstacles they had to hurdle, but patience, persistence, and passion, they managed to make it work.

Poline and Marco’s love story started through a dating website. Poline, a Filipina recalled that in an effort to get her attention, Marco who is an Italian would always “like” her photos. Intrigued by his seemingly unique way of getting her attention, Poline messaged Marco eventually. What started with a simple conversation slowly grew to an intimate and affectionate relationship.

They dated online for two months when coincidentally, Poline was sent to Italy for work. This was the most opportune time for them to finally meet. Their first meeting, as she fondly recalls, was nothing short of a fairytale. From the moment they both laid eyes on each other, they knew that they were meant to be together. Five days later, Marco proposed. Poline eventually moved to Italy for good to be with the love of her life.

Even for same-sex couples, there have been a number of online dating success stories which continue to prove that love is indeed limitless. The love story of Lauren and Olivia is yet another example of what good dating sites can do in terms of helping you find your soulmate. Who would have thought that the very method of dating that gave Lauren so many failed relationships in the past, will also be her instrument in finding her better half?

Lauren and Olivia have been together for over 3 years now. And they are well on their way to spending the rest of their lives by each other’s side.


With over 7 billion people on earth, do you think you’re doing yourself justice by limiting your options for true love within your borders? There’s still a whole world to see and billions of other women to meet overseas. All you need to do is turn on your computer or smartphone, connect to the internet and your quest for true love begins.